In the fall of 1975 my wife was considering a return to college and mentioned that it would be a good time for me to finally obtain my degree. I dismissed this idea at first because I couldn't conceive of myself as a college student again, after being out for over six years, and I was currently enjoying a career in management. Previously I had attended six different universities with a major in law. Due to transfer losses, I had never gotten a degree and had always harbored a little resentment at not finishing.

Well, the prospect was intriguing, but I began to entertain some negative arguments such as, "I am too old to be a student again'; "We can't afford it"; "I have lost too many credit hours"; or "I can't recall enough math to pass." Every one of these arguments, which stemmed from limited, willful thinking, had to be reversed with Christlike truths of man's dominion. Verses eight to thirteen of chapter fifty-five in Isaiah really brought this to light.

Send a comment to the editors
NEXT IN THIS ISSUE
Testimony of Healing
I have been a student of Christian Science since my husband... 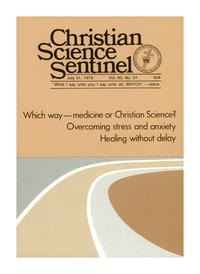