A woman's attention was arrested by a sign announcing a Christian Science lecture. The sign said that the speaker would focus on the nature of scientific Christianity. The woman was puzzled, for although she was an earnest Christian, she did not know how Christianity could be scientific. The more she thought about it, the more questions she had.

What, indeed, is scientific Christianity?

Send a comment to the editors
NEXT IN THIS ISSUE
Poem
"There shall no evil befall thee..." 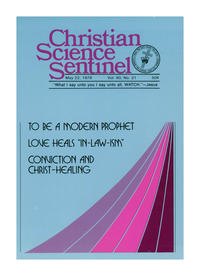