If the world's current population doubles by the end of this century—and it may—what can we do to ensure that everyone will then be adequately fed?

Hunger is no stranger to the people of plant Earth. It has taken its toll of human lives since the beginning of history. Even now it is estimated that there are a thousand million hungry poor needing help not only in the emerging countries of the third world but in nations that are considered mainly affluent. Is the present problem of lack insoluble—to be compounded annually as the population increases? Or can we work with hope of finding the solution? This is the subject of a special inquiry made by The Christian Science Monitor, and a matter that will be extensively covered in a pullout section of its issue of January 12.

Send a comment to the editors
NEXT IN THIS ISSUE
Testimony of Healing
A healing I had two years ago woke me up! 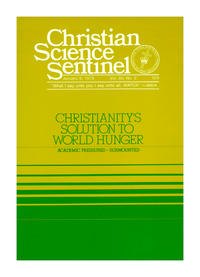