When our only child was just two weeks old, it became apparent...

When our only child was just two weeks old, it became apparent that he could not retain any milk. Our doctor could not determine what was troubling the baby, who was hungry and cried all the time. Although I tried goats' milk and many other things, nothing helped. We then called in a pediatrician, who examined the baby and found that he had an obstruction in his stomach, which prevented him from retaining milk or other food. The doctor said that the baby was too weak to be operated on, and there was no chance he could live. A second pediatrician gave us the same verdict.

We were shocked at the tragic news; but then I remembered that my sister was interested in Christian Science, and I had heard her say that God heals. I telephoned her and asked if she thought the baby could be healed in Christian Science, and she said, "I am sure he can." She gave me the name of a Christian Science practitioner, and I called him. He said, "It is Wednesday evening and I usually go to church, but if it is urgent, I will come right over." I told him that it was most urgent. When he arrived, the baby was crying so loudly that we could not talk. The practitioner agreed to take the case, and he told me to know that God, Life, not food, was the source of my son's strength. That night, for the first time in weeks, the baby, my husband, and I all slept.

Send a comment to the editors
NEXT IN THIS ISSUE
Testimony of Healing
During and after my late teens I suffered for thirty years with... 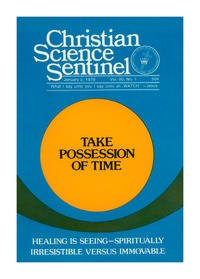