I had testimonies of healing published in The Christian Science Journal...

I had testimonies of healing published in The Christian Science Journal in 1947 and in 1962. Another fifteen years have passed, and I wish again to express my gratitude.

Several years prior to 1971 my brother, who was a diabetic, became concerned about me, as he thought he saw signs of this disease appearing in me. He wanted to know what I was doing about it. I assured him that nothing like that was happening. I prayed for myself and then dismissed the subject. In 1971, when other symptoms of the condition began to appear, I was overcome with fear for myself. Then I realized that I could never accept this condition. I would have to have my healing in Christian Science.

Send a comment to the editors
NEXT IN THIS ISSUE
Testimony of Healing
Twenty-five years ago I was in a deplorable condition with many... 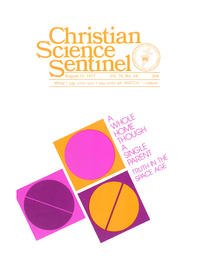