"Why do you want to be different from the other five thousand men in this camp?" demanded the medical sergeant at the Royal Canadian Air Force training depot. I had claimed exemption from all vaccinations and inoculations on religious grounds. I knew there was no legal ruling making such injections compulsory, despite a statement to that effect on the application form. I also realized I must take a stand for divine Principle on this issue if I expected to claim its protection in every other aspect of my military experience.

But the sergeant was not convinced there was any legal basis for such exemption and he sent me to the camp library for a copy of the regulations. When I returned with the document, he read, to his surprise, that inoculations were considered desirable but were not compulsory. After first checking with the Senior Medical Officer the sergeant proceeded to type the requested exemption on my medical record card. 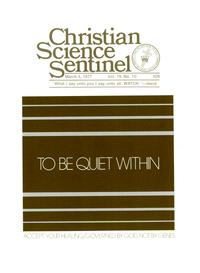