No One Is a Foreigner

What is our reaction when we hear someone speak with an unfamiliar accent? That person's voice patterns, imposed on the speech melody of the language that's strange to him, is producing some static—it stereotypes him as a foreigner, and all too often that is the way we think of him.

The word "foreign" is derived from the Latin foranus, which means "situated on the outside." A foreigner is one who is considered an outsider; somebody who is unconnected and separate. If a foreigner accepts this random label, he may think of himself as not being at home in one country because he is the native of another.

Send a comment to the editors
NEXT IN THIS ISSUE
Article
Reflection: Effortless Expression 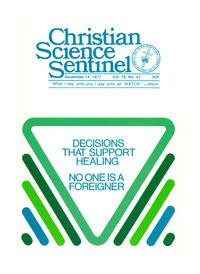