The feeling that I lacked something in my life brought me into...

The feeling that I lacked something in my life brought me into Christian Science. My daughter-in-law graciously loaned me some copies of the Sentinel and tried to explain this Science to me. I became more curious than ever about how scientific spiritual healings were accomplished. My daughter-in-law remarked, "Your attitude toward life has changed so much in the past year of studying Christian Science." It had changed for the better. I was also healed of constipation, headaches, colds, and an injured leg while reading Science and Health by Mrs. Eddy. My husband was later healed of ulcers through the prayer of a Christian Science practitioner. He had previously been in and out of the hospital several times for treatment of ulcers.

Recently, while receiving Christian Science class instruction, I felt very inadequate among young college students and people who had had more schooling than I. In fact, I thought that maybe I should not be in the class. Still, I knew God would not take me halfway but all the way. Class had something to give me that was needed. I realized there was a reason for my being there. The friendliness and compassion I felt gave me courage. I knew then I had sufficient understanding right now; it was not getting something I thought I lacked. I discovered that I must have been envying people who had more than I, such as education, when truly I know what I need to know because I am the reflection of God, all-intelligent Mind. I learned to reject the lie of inadequacy and replace it with the truth of perfect being.

Send a comment to the editors
NEXT IN THIS ISSUE
Testimony of Healing
To say that I have always loved the Ten Commandments would... 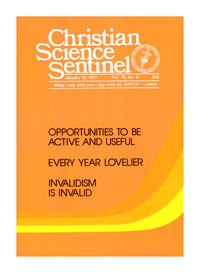