Our Birthright: Sonship, Not Hardship

Do we have to believe that life is hard, subject to chance, change, luck, injustice, and economic cycles? That sickness is to be accepted as normal, inevitable, and inescapable? That man is a sinner, who must pay a penalty?

The fallacious foundation upon which these beliefs rest is the notion that life is material, not spiritual—that we each have a separate life of our own. This false belief that man is a mortal, living in a world of mortals, rather than a spiritual idea existing in divine Mind, gives rise to a multitude of erroneous beliefs claiming to hold mankind in bondage to sickness, sin, and death. If we accept them, we can easily accept hardship as the status quo. "The foundation of mortal discord is a false sense of man's origin," Science and Health with Key to the Scriptures, p. 262; writes Mary Baker Eddy, the Discoverer and Founder of Christian Science. But man's birthright is sonship with God, good. 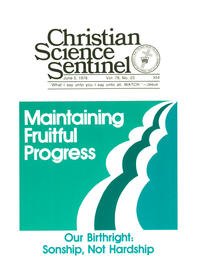