The Womanhood of God's Making

"Woman, thou art loosed from thine infirmity." Luke 13:12; The effect of these words spoken to a woman on the sabbath nearly two thousand years ago can still be claimed by every woman today.

The woman who, according to the New Testament record, had "had a spirit of infirmity eighteen years, and was bowed together, and could in no wise lift up herself" v. 11; was noticed by Jesus after he had been teaching in one of the synagogues. He summoned her to him. It was then that he declared her free. She was healed immediately. 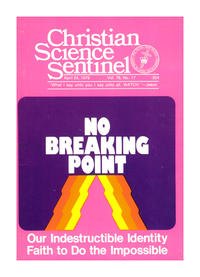