During the time I was growing up, the words "Christian Science"...

During the time I was growing up, the words "Christian Science" were spoken in hushed tones in my home. Our town was old-fashioned. New ideas were frowned upon, and to avoid criticism one did not acknowledge sympathy with any religion but the fire and brimstone teachings of former generations.

Then one year my aunt was healed of ulcers through the study of Christian Science. The doctors had given her three months to live. She was then a young woman. After taking up the study of this teaching she lived an active life until her middle seventies. 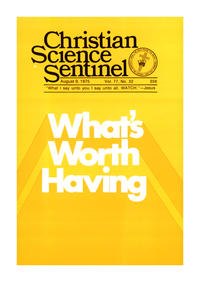