Some years ago a friend came to our home to view movies he had taken of a ski trip in the mountains. When the screening began, he discovered, to his amazement and our amusement, that his film had a double exposure. Apparently he had been sold a film that had been used before, and his skiing pictures were superimposed over those of a tropical beach party. The result was both confusing and amusing.

Though not so amusing, pictures of mankind often appear like my friend's film, full of confusion and incongruity. Good and evil, joy and sorrow, health and disease, success and failure, seem to overlap one another, creating a baffling montage that would cloud our understanding of truth. It would appear as though the human mind and body were imaging forth pictures projected from opposite sources, one spiritual and good, the other material and evil. 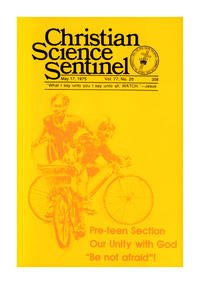