When I found the book Science and Health with Key to the Scriptures...

When I found the book Science and Health with Key to the Scriptures by Mary Baker Eddy, I was in a deep abyss of mental and physical suffering. I was suffering from dyspepsia. I had only one meal a day, as I was afraid more could harm me. The foods were almost all select, but I still had stomach pains. The nights were long and sad. There was a period when I didn't sleep for about twenty-five days. Besides, I was suffering from hallucinations.

On the last night that I didn't sleep, which was in June of 1968, I read an article in The Herald of Christian Science relating that the Apostle Paul was in tribulation and had heard the voice of God, which told him (II Cor. 12:9): "My grace is sufficient for thee." I repeated to myself, "If it was sufficient for him, it will also be sufficient for me." And I was instantaneously healed. I then went to sleep and slept the entire night, waking the next day with great peace of mind.

Send a comment to the editors
NEXT IN THIS ISSUE
Testimony of Healing
I am very grateful for the privilege of being a student of Christian Science... 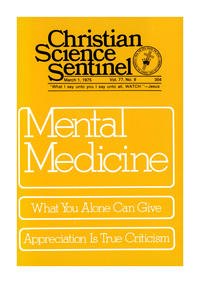