At one time I found myself thinking that supply and substance...

At one time I found myself thinking that supply and substance were material, that income and security were derived from my job. In my business one was not reimbursed or compensated unless sales were made. Essentially I was on a commission-only basis, although there could be a small draw against commissions. However, I had recently been married and began to have a frustrating feeling of not being able to support myself and my wife.

I enlisted the aid of a Christian Science practitioner to help me through prayer. I felt that the only real and lasting solution to the problem lay in demonstrating the truths of this religion. In my career in sales I had always been taught that to be successful a salesman should be aggressively ambitious and have plenty of drive. I learned that I was wrong. Such traits of mortal selfhood are not expressed by man in his real nature as God's idea, ever motivated and governed by God, nor are they included in God's unfoldment of good to His creation. I also learned that it was my job to better reflect God in all that I did. 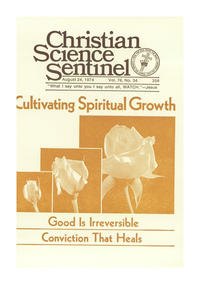