by recognizing God's love for us

One morning an inspiring incident in my work clearly indicated the presence of the power of God, good. Soon after, however, my happiness appeared to be reversed by a recital of woes poured out by an associate. During the day I couldn't shake off the depression and sense of a power opposed to God that descended on me as a result of this outpouring, until finally I was forced to stop what I was doing and really face up to my negative response.

I recalled that Mrs. Eddy tells us: "Three times a day, I retire to seek the divine blessing on the sick and sorrowing, with my face toward the Jerusalem of Love and Truth, in silent prayer to the Father which 'seeth in secret,' and with childlike confidence that He will reward 'openly.'" Miscellaneous Writings, p. 133;

Send a comment to the editors
NEXT IN THIS ISSUE
Article
Wake from That Dream! 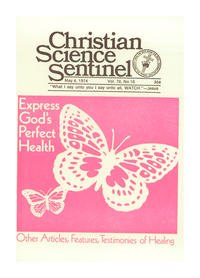