It has been many years since I began the study of Christian Science...

It has been many years since I began the study of Christian Science, which has brought many healings to our family.

I had suffered severe pain from stomach trouble for more than twelve years. I went to several doctors and specialists, tried prescribed exercises, baths, and so on, but received no cure. A Christian Science friend had given me a Sentinel, but I did not understand it, so I did nothing about it until a growth appeared in the breast. Then I quickly turned to Christian Science and was healed of both problems.

Send a comment to the editors
NEXT IN THIS ISSUE
Testimony of Healing
In the story of Eutychus we learn that a fall, even though seemingly... 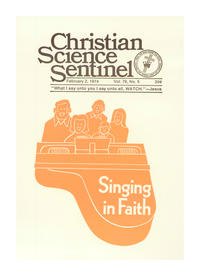