Good-bye, Jack and the Beanstalk

One morning as I was riding along the highway, I had the familiar pleasure of watching and naming the myriad cloud formations in a glorious summer sky. It seemed that the sky was dancing with the fairy-tale figures of childhood. Giants, princes, turreted castles, Jack and the Beanstalk, Little Red Ridinghood, and even the wolf—marched across.

As I recalled the old stories, it occurred to me that although they often hinted at basic truths, they were—at a literal level—fictitious, fleeting, without foundation in fact, like the myths of materiality. Mrs. Eddy writes, "The varied doctrines and theories which presuppose life and intelligence to exist in matter are so many ancient and modern mythologies." Science and Health, p. 319; As children develop in their thinking through experience and education, they learn to recognize realism and to abandon belief in childhood fairy tales. Why, then, do we not relinquish totally our belief in illusions that seem to beset our path—myths called pain, sorrow, fear, and doubt? 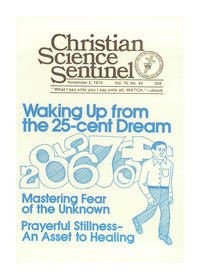