When I first picked up the textbook, Science and Health by Mrs. Eddy,...

When I first picked up the textbook, Science and Health by Mrs. Eddy, a little more than eight years ago, I was having a great deal of pain in one of my teeth. I had been to the dentist and had the tooth filled, but the ache continued. When I returned some time later, he told me he could find no reason for the pain. The only thing I could do was take a drug each day.

After reading Science and Health for just a few weeks it became very clear to me that man is wholly spiritual, and with this thought came a healing of any need for medicine. In addition to what the dentist recommended, I had been taking seventeen pills every day for a multitude of ills. Several pills were to replace the functions of a gland that had been removed surgically about a year before. Doctors had told me that I would need this medication for the rest of my life. Through the reading of the textbook and treatment by a Christian Science practitioner I was not only freed from the need for medication but healed of the smoking habit, social drinking, and the tooth problem. My need was great, and I was on my way to proving that "divine Love always has met and always will meet every human need" (Science and Health, p. 494).

Send a comment to the editors
NEXT IN THIS ISSUE
Testimony of Healing
Christian Science shows us how to enter the kingdom of God... 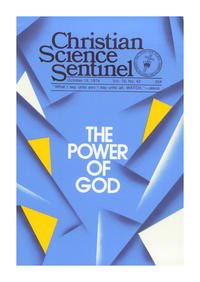