In June of 1972, for the first time, I attended the Annual Meeting at The Mother Church in Boston. During one of the meetings mention was made of the advantage of having the Christian Science textbook in public libraries. I wanted to get up on my feet and shout "Yes, yes! Keep all the books on Christian Science in all the libraries, and especially Science and Health with Key to the Scriptures by Mary Baker Eddy. That is where and how I discovered for myself the wonderful religion of Christian Science forty years ago."

At that time I was traveling with an aunt, uncle, and cousin. We had an apartment in Long Beach, California, and would take trips for a week or so, then come back to the apartment to rest and plane the next trip. I could go with them on very few trips because most of them required a great deal of walking, and I was unable to walk more than four or five city blocks at one time. The anklebone of my left foot had been injured in an accident while I was a senior in high school, and I had graduated on crutches. After a number of doctors had re-broken and reset my ankle several times, they finally informed me, "There is nothing more we can do. You will just have to learn to live with the fact that for the rest of your life you can walk on that foot but a short distance at a time." For someone who had been active in tennis, golf, bowling, and other sports, the future was bleak indeed.

Send a comment to the editors
NEXT IN THIS ISSUE
Testimony of Healing
It is with deep and sincere gratitude that I wish to offer the... 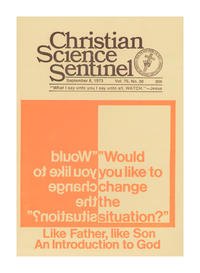