When I was a young college graduate, I became a close friend...

When I was a young college graduate, I became a close friend of someone who was a sort of substitute family to me. I was an only child, my mother passed on when I was a young teen-ager, and my father and I were not very companionable. In the generation gap, I saw him only as a strict disciplinarian. My new friend, I learned later, was a Christian Scientist. I knew nothing at all of Christian Science, had heard only derogatory remarks about it, and during my college years had considered myself among the intelligentsia who thought the existence of God an impossibility—having dropped the faith I once had as a child in an orthodox church and Sunday School. Therefore I just couldn't understand how such a lovely person could believe in Christian Science. I soon learned, however, that there were many other lovely people who were Christian Scientists, and they too became my friends. After a time I began attending church with some regularity and occasionally read with my friend the weekly Lesson-Sermon in the Christian Science Quarterly, finding the Bible references and the correlative passages in the textbook, Science and Health by Mrs. Eddy.

Several years later, when I was finally beginning to see a light of truth in the teachings of Christian Science, a healing of what I supposed to be bursitis caused me to drop all my resistance to it. I spent many a sleepless hour at night, sometimes walking the floor with an aching, throbbing shoulder, praying for a better understanding of my true spiritual identity. A statement from the Christian Science textbook was constantly in my thought (p. 463): "A spiritual idea has not a single element of error, and this truth removes properly whatever is offensive." When I released my human sense of self and stopped battling with the belief of having a mortal body with an arm and shoulder, I was healed. I didn't know when the healing took place; I just forgot about it. Some weeks later I realized I was free and had been for some time. I'm grateful for this testing time that brought about my awakening, and for every prayerful moment my friend gave me in support. 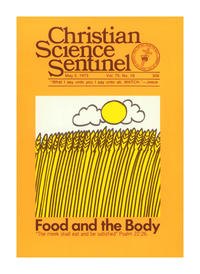