He that dwelleth in the secret place of the most High shall...

"He that dwelleth in the secret place of the most High shall abide under the shadow of the Almighty" (Ps. 91:1). I was introduced to Christian Science five years ago, and have had many proofs of the glorious truths of this practical religion. I have had many occasions to joyously claim my dwelling place in that secret place, which, as we know in Science, is the conscious awareness of life at one with God.

Most recently I had to resort to these truths while on a skiing trip in Switzerland. It was an unusually windy and cold day, and my husband and I were blown off the T-bar ski lift. To return to our village, it was necessary for us to take a cable car from the top of the mountain. We decided to walk to the top rather than try the lift again under such seemingly treacherous conditions. We took our skis off and began climbing to the top, at an altitude of about nine thousand feet. After about forty-five minutes I was gripped with a horrible fear of freezing to death. I do not know what the temperature was, but it was certainly colder than any climate I had ever been in. The impact of the winds was so fierce that several times we had great difficulty in continuing our climb. I felt it difficult to talk or to move my facial muscles and, as time went on, it became more difficult to breathe.

Send a comment to the editors
NEXT IN THIS ISSUE
Testimony of Healing
During 1969, I was employed as a program manager for an... 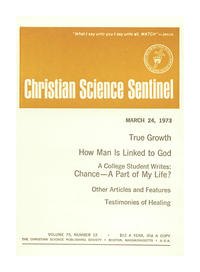