Katie clenched her hands angrily. If only there had been a little more time! The debate had been titled "Men versus Women: Who's Superior?" The boys had sat confidently behind their table, spouting statistics and comparisons, and backing them up with quotes from the Bible. The girls had quoted from medical journals, well-known authors, and philosophers but searched the Bible in vain. Orthodox religion had got the upper hand, and the boys had won the debate.

Katie left the school frustrated and angry. At home she slammed her door shut and flung her books down on the bed. Losing the debate was just another point for the boys in the battle of the sexes. "Doesn't God care anything for women?" she demanded of the thin air. Rankled, she searched under the bed for her Bible. It wasn't there, so she snitched her mother's. Impatiently she got her Bible concordance.

Send a comment to the editors
NEXT IN THIS ISSUE
Article
YOU ARE ALWAYS SAFE? 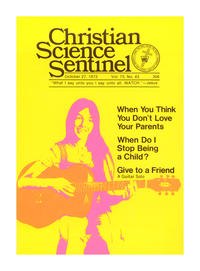