From infancy I was raised in a Christian Science home and...

From infancy I was raised in a Christian Science home and attended Sunday School from an early age. As a teen-ager, then in college, and during the Second World War, I gradually drifted away from studying the Lesson-Sermon in the Christian Science Quarterly and attending church. The excuses presented themselves that I didn't have time because of school studies, and later in the armed services, that there was lack of opportunity and quiet for study. Eventually I was engulfed in matter and relying on material medicine. My wife was not interested in Science, although she had attended services with me in the early years of our marriage and had witnessed healings.

Many years of my life were full of ups and downs. It was like riding a roller coaster. Over the years it seemed that the downs were more than the ups. I believed that good business required a dog-eat-dog type of approach. This resulted in financial turmoil and affected my marriage, which was nearly on the rocks. Then tragedy struck our family when our small son was drowned. Seeking but not receiving satisfactory explanations from her minister, my wife began to attend Christian Science church services without my being aware of it. Then one day she told me she was interested in Science. It was as though someone had turned on a light, for I realized that this was the real answer to all our problems.

Send a comment to the editors
NEXT IN THIS ISSUE
Testimony of Healing
"The word of God is quick, and powerful, and sharper than... 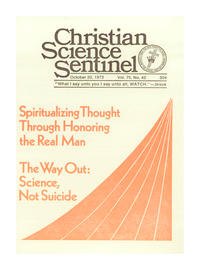