Contributing and writing are commonly assumed to define the same process when referring to an individual's expression in print. It might be helpful, however, for us to consider them as two different things. The difference would be between the spirit and the letter: contributing being the spirit; writing, quite literally, being the letter.

Sometimes certain writings appear to utter themselves without obvious obtrusion of the letter, as can often be seen in the case of works that have deeply moved us. The idea that contributed to the writing becomes active in our being. And if the author's sense of motivation is high, the idea can continue to "contribute" long after the writing has been forgotten. 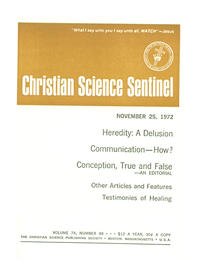