In the spring of 1953, I was in the United States Navy hospital at San Diego suffering from a condition termed by the medical staff as rheumatoid arthritis. I had been interested in Christian Science for some seven years, but I still placed great reliance on material medical methods.

I had pursued the study of Christian Science because of its spiritual beauty, because of its higher concept of God than I had been able to find in other religions, and because it enabled me to live a better Christian life. For instance, without any effort of will on my part, my appetite for alcohol had been overcome, and the desire for tobacco had just suddenly and completely ceased to exist. In regard to the tobacco habit, I suddenly realized one day that it was gone. As nearly as I could remember, it must have been about fifteen days since I had last smoked. I had not noticed it because there had been no headaches or other withdrawal pains, and I had made no resolution to quit. I had, of course, made a decision previously to be as Godlike as I could be, but I had not consciously related that to smoking. Freedom from that useless and inconvenient habit has been a cause for rejoicing over Christian Science ever since.

Send a comment to the editors
NEXT IN THIS ISSUE
Testimony of Healing
"Look unto me, and be ye saved, all the ends of the earth: for... 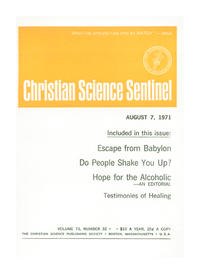