In Philippians, St. Paul writes (1:21): "For to me to live is Christ, and to die is gain." To me, this verse used to have a personal meaning, since before I understood Christian Science I held a very personal and material sense of Christ and of the Christian religious teaching. My understanding of this verse was very literal. The spiritual meaning was beyond me, and I never understood my real selfhood.

During my war service I was introduced to Christian Science. I could not understand it, and I ridiculed it. In later years, when sickness, problems, and responsibilities seemed insurmountable, I looked to death to release me from the hardship of living. In 1964, when I suffered a coronary thrombosis, it appeared that this release was about to be realized. After about four months of medical treatment I was back at work, but it was not long before the trouble returned with greater severity. On consulting the medical profession I was told that nothing could be done and that I had to learn to live with the trouble. I then realized that the only solution would be divine healing.

Send a comment to the editors
NEXT IN THIS ISSUE
Testimony of Healing
After more than fifty years of proving the efficacy of Christian Science... 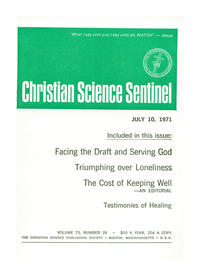