[The above is an abbreviated, postproduction text of the program released for broadcast the week of August 21-27 in the radio series, "The Bible Speaks to You." Heard internationally over more than 1,000 stations, the weekly programs are prepared and produced by the Christian Science Committee on Publication, Christian Science Center, Boston, Massachusetts, U.S.A. 02115.]

[The participants are Jack Hubbell and Rob McKinnon]

McKinnon: A number of professional approaches are used to settle disagreements at work, such as grievance committees, arbitration boards, and strike settlement negotiations. But when these methods fail to bring a quick end to strife, those of us on the sidelines often wish we could do something to harmonize the situation and bring about a settlement. 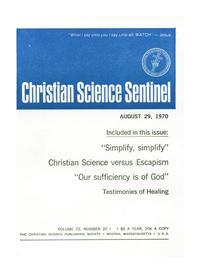