My expression of gratitude for Christian Science is long overdue...

My expression of gratitude for Christian Science is long overdue, for it was over fifty years ago that Christian Science was introduced to our family. This applies to all three members of our family, none of whom has placed himself under medical care during the ensuing years.

I recall with gratitude a healing of rheumatism many years ago while I was traveling in the Dakotas for a local oil company. I traveled by freight or passenger trains, thereby moving faster, because those on whom I called were usually near the railway. It was near Christmas, and I was advised to go home for the holidays. After but a few days at home I was told to return to my work in the North. With a great deal of resentment I started. I began to experience pains in my limbs so severe that I requested permission to return home. I recall that I climbed aboard trains on my hands and knees with help from porters. I kept wiring for permission to return, and at last I received it. But instead of returning I phoned my wife, who placed my situation in the hands of a Christian Science practitioner.

Send a comment to the editors
NEXT IN THIS ISSUE
Testimony of Healing
Having been raised in Christian Science, I can attest to the joy it... 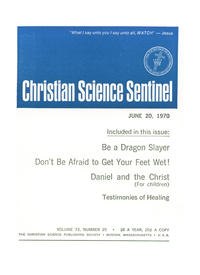