"If only I had enough willpower to stop smoking!" is a lament we often hear. I remember making this same remark when I tried to break a two-pack-a-day smoking habit. I also remember the frustration of continuing to do something that I really didn't want to do. Yet because I had tried to stop smoking and failed, I felt there was no answer to the problem.

After becoming a student of Christian Science I found an answer to my smoking problem; however, it was not one I had expected. In studying the writings of Mrs. Eddy I learned that instead of needing more willpower to stop smoking, I really needed less. I discovered the revolutionary fact that smoking was actually the manifestation of human will. 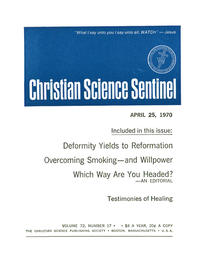