In my teens what the doctors termed osteomyelitis developed in...

In my teens what the doctors termed osteomyelitis developed in my left leg. This condition continued at intervals to cause me severe pain for some ten years, being more severe when the cold weather came. After I had had several operations, being attended by doctors frequently and going to special physicians and surgeons three different times, it finally seemed I would not survive. Then, since I had tried everything else we knew, my wife suggested that I try Christian Science. My parents had given me good Christian religious training so far as they knew how. In those days there seemed to be a general fear of God and that He could and did punish us for our sins. I did not know what sins I had committed, but I thought I must have done or was doing something wrong.

At this time my work had taken my wife and me rather far from our home, but those around us tried the best they could to help. We found a Christian Science practitioner, who came and talked to me and sat with me each afternoon. I very much wanted to understand how Christian Science heals, but at that time it seemed I could not grasp the spiritual reality of my being. They finally put me on a cot in the baggage car of a train and sent us home, where another devoted practitioner took up the treatment. In two days I had great relief. I was back at work in a little over a month. Very soon all evidence of the trouble ceased, and there has been no recurrence.

Send a comment to the editors
NEXT IN THIS ISSUE
Testimony of Healing
I had the great privilege of attending a Christian Science Sunday School... 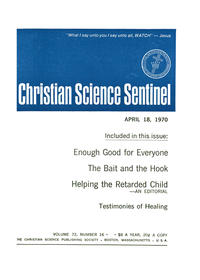