Color: Where We Are

In many communities both blacks and whites are at a point where they can begin to tolerate one another. But many of us still find encounters uncomfortable. We long to express genuine love but don't know how. The human mind sometimes attempts to make a religious adjustment. Even though it falls short of a Christian view of man as God's offspring, this can be a real step in the right direction. But too often it is more in the nature of an attempted escape.

One can seek escape from pain by becoming unconscious. One can try to escape the discomfort of having to deal with people of another color by losing consciousness of color. And when the problem appears, one can appeal hopefully to his sense of virtue by saying to himself, if not to others, "I'm glad I've become color-blind where people are concerned." 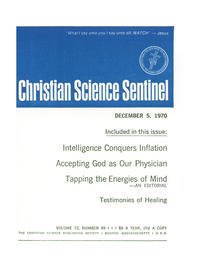