No Fear of Fear

To mortal sense, the two conditions, fear and disease, may seem to operate in a sort of cycle in which each one contributes to the other. Such a cycle would blur the true nature of things and confuse cause with effect. Mrs. Eddy makes perfectly clear the relationship between fear and disease when she writes in  Science and Health: "The procuring cause and foundation of all sickness is fear, ignorance, or sin. Disease is always induced by a false sense mentally entertained, not destroyed."Science and Health, p. 411; 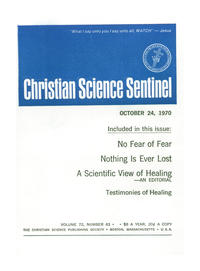