An Interview: on business standards

with contributions from Dallas Bernard

Sir Dallas Bernard began his career in H. M. Navy and followed up with twenty years in commerce in Hong Kong and China. Returning to London in 1928, he worked in the City and eventually became Director of the Bank of England serving for five years as its Deputy Governor. More recently he was chairman of Courtauld's, the world's largest textile firm. Sir Dallas has been active in the Christian Science movement since his early days in Hong Kong and Shanghai. Today he is Representative in Great Britain of the Treasurer of The Mother Church.

For some, the term "banker" or "corporate manager" may suggest a twentieth-century Scrooge whose enormous power is accompanied with little concern for the Bob Cratchits of society. How do you look at this criticism? 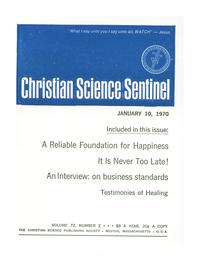