The Medicine of Mind

So educated is human thought to believe in the power of material medicine that some individuals when introduced to Christian Science find it difficult to give up fully their reliance on material remedies and depend radically upon divine Mind for healing. Perhaps they have seen beneficial effects of drugs on the body, little realizing that those effects were only evidence of the endorsement of the universal belief, as well as of their own, in the power of those drugs.

Christian Science explains the seeming power of medication as merely a state of mortal belief; it also shows the negative effect that trust in medicine has on spiritual development. In Science and Health with Key to the Scriptures Mary Baker Eddy says, "The universal belief in physics weighs against the high and mighty truths of Christian metaphysics."  Science and Health, p. 155; 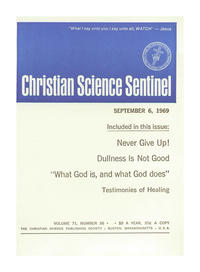