Plagued with a so-called incurable disease, I was directed, in...

Plagued with a so-called incurable disease, I was directed, in 1906, to the subject of Christian Science. I obtained a copy of Science and Health with Key to the Scriptures by Mary Baker Eddy. Previous to that time all orthodox religions I had known indicated or stated directly that the reward of heaven must come, if at all, after death. As such teaching did not appeal to me, I had no serious attraction to or interest in any church organization.

Imagine, if you can, my joy when I opened the above-mentioned book and realized the importance, the power, of the first line of the Preface, which reads: "To those leaning on the sustaining infinite, to-day is big with blessings." A reward in the ever-present now! Here, for the first time, I found a promise that as I thought and lived today, so was my reward today. The realization of what that promise means was so great that I found I was healed of Bright's disease, which was the medical diagnosis of my difficulty.

Send a comment to the editors
NEXT IN THIS ISSUE
Testimony of Healing
It is a pleasure to testify to the power of the truth as taught in... 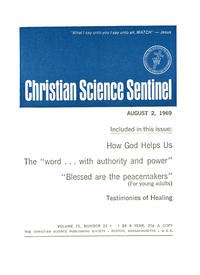