The Safety of the Secret Place

On an occasion when the Jews were incensed with Christ Jesus, they "rose up, and thrust him out of the city, and led him unto the brow of the hill whereon their city was built, that they might cast him down headlong. But he passing through the midst of them went his way."  Luke 4:29, 30;

With what dramatic simplicity the Master achieved his safety! One senses the purity and tranquillity of his consciousness amidst the pushing, furious hatred that was bent on destroying him. Although, as a human being, he was in the very midst of them, his knowledge of his divine identity as the beloved Son of God made him invulnerable. 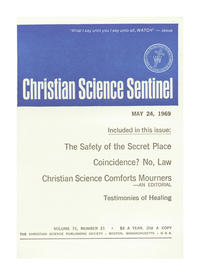