The Challenge of Conscience

The human race has been striving for a long time to follow the familiar advice, "Let your conscience be your guide." Countless men and women today, as in the past, are trying their best to listen for and obey a guiding voice that will lead to higher planes of moral and spiritual living. Unfortunately, there has been little understanding or agreement as to just what conscience is, and even less as to how it guides.

Traditional religious concepts include conscience as a stern moral watchdog we become painfully aware of when our behavior is wrong. In this view, conscience patrols the boundary between right and wrong, but it has little to say when one is doing right. This concept has played an important role in the progress of mankind, but alert individuals today are discovering that conscience has a wider, more dynamic meaning and scope. 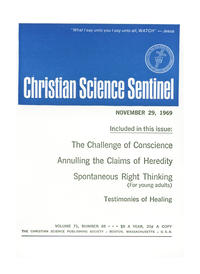