Which Picture Is Real?

A while ago the writer saw a motion picture of a small plane crossing the Alps. This plane swooped up and down mountain canyons in breathtaking flight while the earth reeled below. The writer, although comfortably seated, began to have an overwhelming sense of fear and dizziness, for she felt she was actually in that plane, experiencing that hazardous flight.

Then she thought, "Take yourself out of the picture." This she did by knowing that the scene portrayed on the screen was no real part of her experience, for she was not in a plane. The movie continued in the same manner, but the writer no longer felt that she was experiencing any of the fearful sensations of that flight.

Send a comment to the editors
NEXT IN THIS ISSUE
Article
An Interview: with a Champion Skier 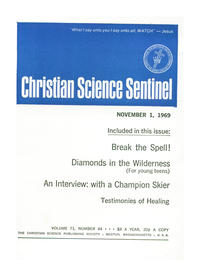