How Relevant Is Religion?

The general indifference toward religion today stems largely from a misunderstanding of what religion really is. Clothed in traditional forms of ceremony, creed, and doctrine, religion does indeed appear irrelevant in this modern age. To many, the Bible remains a closed book, rendered impracticable by archaic language and conflicting statements.

It is small wonder, then, that many people regard religion and daily living as incompatible. To them, God is relevant to the religious world but totally alien to the ordinary daily round and its many problems. 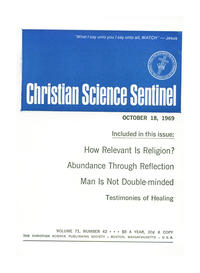