I have experienced many blessings through the study and application...

I have experienced many blessings through the study and application of Christian Science for many years. For two years prior to this study I was attended by three of the best medical doctors where I then lived, besides taking every patent medicine that came along, without receiving any benefit for stomach and bowel trouble. I had lost quite a bit of weight. I was so discouraged that several times the thought came to me to take my own life. Had it not been for a wife and baby daughter, I believe I would have attempted to do so, but I would always think of them and say to myself, "I cannot do that because it would be a cowardly act."

One day I was with a friend, and I told him that I did not know what I was going to do, as I thought I had reached the end of my rope. He asked me if I knew anything about Christian Science and told me a little about it. He gave me the name of a Christian Science practitioner. As I was reaching out for anything that offered hope of healing, I at once telephoned the practitioner and made an appointment to see her and asked for help through prayer. 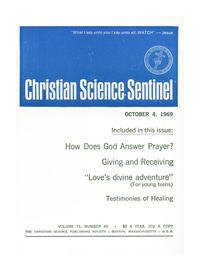