Many people are spiritually demonstrating their dominion over contagion and other false beliefs of material law that would claim to rob them of their God-given freedom and harmony. We need not be helpless victims of contagion. Man as God's child has absolute immunity from evil. God's laws are spiritual and good, producing harmony. They blot out whatever is harmful or afflictive.

Christ Jesus did not allow material law to restrict him in any direction but proved God's law to be supreme. The account in the eighth chapter of Matthew of the healing of the leper states: "A leper [came] and worshipped him, saying, Lord, if thou wilt, thou canst make me clean. And Jesus put forth his hand, and touched him, saying, I will; be thou clean. And immediately his leprosy was cleansed." Matt. 8:2, 3;

Jesus approached disease fearlessly. He showed his complete mastery over the false laws of infection often connected with leprosy by touching the man as he healed him. The touch in itself had no power to heal, but evidently indicated Jesus' absolute disbelief in disease and his rejection of it. The healing power was the Christ, Truth, which Jesus exemplified. He healed by utilizing the power of Principle, God, realizing the presence of but one law—spiritual law.

Principle is the source of all true government, of harmony instead of discord. Creative Principle is the only cause and the source of all justice. Therefore material law is proved through Christian Science not to be law at all but a mortal mind illusion and therefore a counterfeit of God's perfect, spiritual law. In Science and Health Mrs. Eddy says, "The supposed laws which result in weariness and disease are not His laws, for the legitimate and only possible action of Truth is the production of harmony." Science and Health, p. 183;

Since man is in reality spiritual and not material, he cannot be subject to any belief of physical law. The belief that disease must develop after exposure to contagion is proved false when we realize that God is not the author of such a law. It is the fleshly mortal mind that wants us to believe we are helpless victims of physical law and must suffer as a result of breaking it. Quite the contrary.

Science and Health states, "Instruct the sick that they are not helpless victims, for if they will only accept Truth, they can resist disease and ward it off, as positively as they can the temptation to sin." p. 420 ; As we understand and actually live the truth that man is a spiritual idea with God-given purity, dominion, and freedom, we are able to ward off contagion. We realize that man has a heritage of good, not evil; health, not sickness; life, not death; dominion, not restriction. Thus we prove that man cannot be victimized by error.

True law is an enactment of divine wisdom; therefore the belief of contagion is an error of mortal belief. Mrs. Eddy states: "Disease arises, like other mental conditions, from association. Since it is a law of mortal mind that certain diseases should be regarded as contagious, this law obtains credit through association,—calling up the fear that creates the image of disease and its consequent manifestation in the body." p. 154 ; As we replace mortal mind, or materialistic thinking, with the truth that God is the only Mind, the only source of law and government, and that His will for man is always good, we are freed from fear.

The author's elder son was twice protected from the belief of contagion. On both occasions he had been in close contact with a playmate who had contracted a contagious disease. The other child had afterward been put under quarantine by a physician. Each time the mother came to our home, saying that our son would also develop the disease in a given number of days.

We confidently turned our thought to God, knowing that this child was completely safe under God's government. We further realized that our son and all men were immune from the belief of contagion because the identity of man is the perfect, spiritual image and likeness of his Father-Mother God, completely safe in His care. Contagion, we knew, was a spurious law of mortal mind, not a law of divine Principle. Therefore this child could not be subject to something God would not and could not create. Upon neither occasion was there any evidence of the contagion. The child remained well, happy, and free.

We can confidently place ourselves and all mankind under God's care and come to realize this promise: "Because thou hast made the Lord, which is my refuge, even the most High, thy habitation; there shall no evil befall thee, neither shall any plague come nigh thy dwelling." Ps. 91:9, 10. 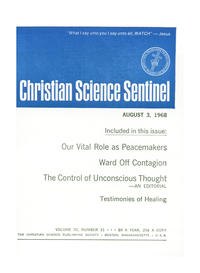