A little more than a hundred years ago the land now known as Boston's Back Bay, the area in which The Mother Church is situated, lay largely under water. Washed by the Charles River at high tide, it lay marshy and unsightly at the tide's ebbing.

In 1857, pressed by the city's growing population and its increasing need for home sites, Boston civic leaders decided to fill and reclaim the area. The project took more than twenty years to complete, but the land it yielded became the intellectual, cultural, and religious center of Boston. It was a small parcel of this land that Mrs. Eddy deeded to her followers as the site for The Mother Church.

Send a comment to the editors
NEXT IN THIS ISSUE
Testimony of Healing
Christian Science was presented to me approximately thirty... 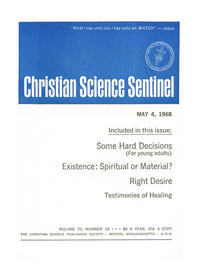