When I was introduced to Christian Science, I was suffering...

When I was introduced to Christian Science, I was suffering from rheumatism and sciatica. I had been trying various types of medical treatment without benefit.

A friend recommended that I go see a Christian Science practitioner whom he knew and made me promise to do so. I went only because of my promise, for I had no idea of what Christian Science was. My visit to this kind and wise practitioner resulted in my taking up the study of Science. The healing of the rheumatism and sciatica took a year or two, during the course of which I had four treatments from the practitioner. But shortly after starting to read Science and Health by Mrs. Eddy, I was able to heal myself of the effects of a burn, an experience which proved that I had received enlightenment from the beginning.

Send a comment to the editors
NEXT IN THIS ISSUE
Testimony of Healing
Christian Science was presented to my mother when I was just a... 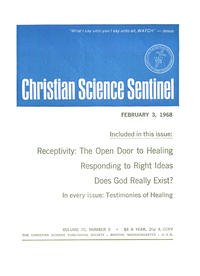