Filled with gratitude, I recognize the richly beneficent influence...

Filled with gratitude, I recognize the richly beneficent influence Christian Science has exerted on my life thus far. In 1952, I still suffered from the results of a war injury, which had led to what is called a fistular suppuration of the upper left thigh. This festering had already been diagnosed by one doctor as incurable; other doctors had attempted treatment without success. Thus I had put up with this condition, which I then regarded as inevitable, and had become used to applying the necessary dressing myself. I had completed my study and begun my profession as a teacher, and I paid this so-called incurable illness no more attention than I was forced to by circumstances.

Once as I was telling an older woman some of my personal affairs, I learned something from her about Christian Science for the first time in my life. What I learned made a deep impression upon me, for even at that time I was very much interested in religious questions. I welcomed the opportunity of learning more of Christian Science, although at the beginning of my studies I by no means believed it could have a healing effect on my physical condition. Only a little later on did I ask a Christian Science practitioner to take up prayerful work for me.

Send a comment to the editors
NEXT IN THIS ISSUE
Testimony of Healing
Mrs. Eddy writes in Pulpit and Press (p. 3), "Know, then, that... 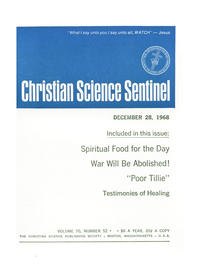