Memorizing the Nativity of Jesus

To many individuals the season of Christmas is the most holy in the year. Among Christians and non-Christians the world over it is a season of goodwill; and where fighting is going on, it is often a period of truce and a symbol of peace.

To the primitive, simple thought, represented by the shepherds, angel voices proclaimed the glory of God and peace on earth at the birth of the child Jesus. To the wise men of the earth, represented by the Magi, a star lighted up the place where true wisdom lay and led them there. To the mortal, fleshly mind, represented by Herod, rumor of the birth brought intense fear of annihilation and aroused antagonism, hatred, and revenge. Mrs. Eddy states, "It is most fitting that Christian Scientists memorize the nativity of Jesus." Miscellaneous Writings, p. 374; Elsewhere in the same book she tells us, "Christ Jesus' sense of matter was the opposite of that which mortals entertain: his nativity was a spiritual and immortal sense of the ideal world." p. 74; 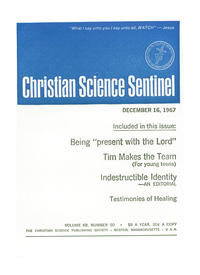