When I was in high school, my sister tried to interest me in Christian Science

When I was in high school, my sister tried to interest me in Christian Science. I went to Sunday School for a while, but it was not until after I had finished college and married, had a daughter, and had ended my marriage in divorce that I really became interested in this religion.

I began to study Christian Science and to attend church services in an attempt to straighten out my life and put it on a firm foundation. During the first year of my study my health and disposition improved radically. Although my former husband and I were living half a continent apart, and neither of us had previously given any serious thought to reconciliation, we decided to remarry. We have since been blessed with a happy marriage and home and now have a son as well as a daughter. Both of these children have attended Christian Science Sunday School since they were two years old. They are both members of The Mother Church, and our daughter is attending a school for sons and daughters of Christian Scientists.

Send a comment to the editors
NEXT IN THIS ISSUE
Testimony of Healing
My parents, who knew very little about Christian Science, enrolled... 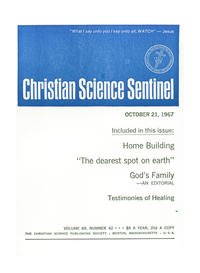