The Significance of Jesus' Resurrection

It was not alone the desire of Joseph of Arimathea to give the mortal remains of a loved one an honorable burial that prompted his pleading for the body of Jesus. Joseph is referred to in all four Gospels. In one he is spoken of as "a disciple of Jesus, but secretly for fear of the Jews" John 19:38; ; in another as "a rich man" Matt. 27:57; ; in another as "an honourable counsellor, which also waited for the kingdom of God" Mark 15:43; ; and finally as "a good man, and a just." Luke 23:50; Was he not inspired by God, the source of his goodness, to do his part in preparing for what was to come? Mrs. Eddy says, "The lonely precincts of the tomb gave Jesus a refuge from his foes, a place in which to solve the great problem of being." Science and Health, p. 44;

The malice and hatred that were vented in the crucifixion appeared to be spent when the soldiers saw that Jesus "gave up the ghost." Luke 23:46; Therefore the thought of Jesus' enemies, by their own consent, did not go beyond their belief in the grave as an end to life. Thus the weight of evil suggestions was lifted from the Master, and he was freed from the pressure of mortal thoughts and was able to recapture his vision gained on the mount of transfiguration. He could have ascended without the agony of the betrayal and desertion of his followers and the tortures of the crucifixion, but the world would not have had the proof that death cannot kill man and that men are able through Christ, Truth, to overcome all that is unlike good. The highest proof of Jesus' love, we might say, was not the ordeal of the crucifixion, but his willingness to come back from the glory of the transfiguration and submit to the crucifixion. 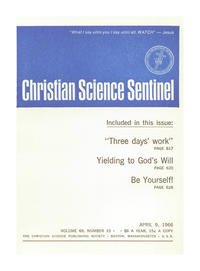