The parable of Dives and Lazarus which Christ Jesus expounded, teaches a fundamental lesson of scientific Christianity. First comes the description of "a certain rich man which was clothed in purple and fine linen, and fared sumptuously every day" (Luke 16: 19). Then we have the description of a poor man, Lazarus, who was sick and hungry and who sought the crumbs that fell from the table of the rich man generally called Dives. Both men died, and Lazarus found himself at peace in the bosom of father Abraham, whereas Dives was in a tormenting hell.

When Dives begged Abraham to send Lazarus to dip his finger in water and cool his tongue, Abraham replied, "Between us and you there is a great gulf fixed": and he declared that neither one could pass to the other. 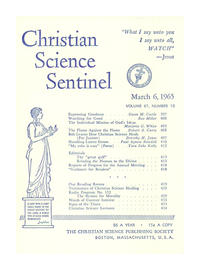