I learned of Christian Science...

I learned of Christian Science while living in the home of a friend whose daughter, who was later to become my wife, was suffering from an internal complaint. The family doctor had told her that he could do no more for her and that even an operation might not help. She lay in a darkened room most of the time.

One day when the pain was more intense and her prayers more sincere, the words "Christian Science" came vividly to her thought. As a result, a practitioner was brought to the home and for two hours expounded Christian Science.

Send a comment to the editors
NEXT IN THIS ISSUE
Testimony of Healing
It is with sincere gratitude that... 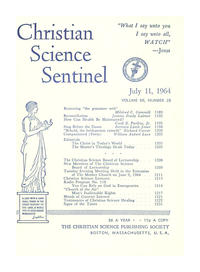