"What does God know about baseball?"

Tom came to his father one day and complained about his baseball-playing ability. He was striking out frequently; his teammates were criticizing him openly for letting the team down, and as a result he was fearful every time his turn came to bat.

His father reminded him of the help he had received in Christian Science on other problems, such as in the maintenance of health. 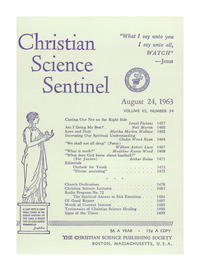